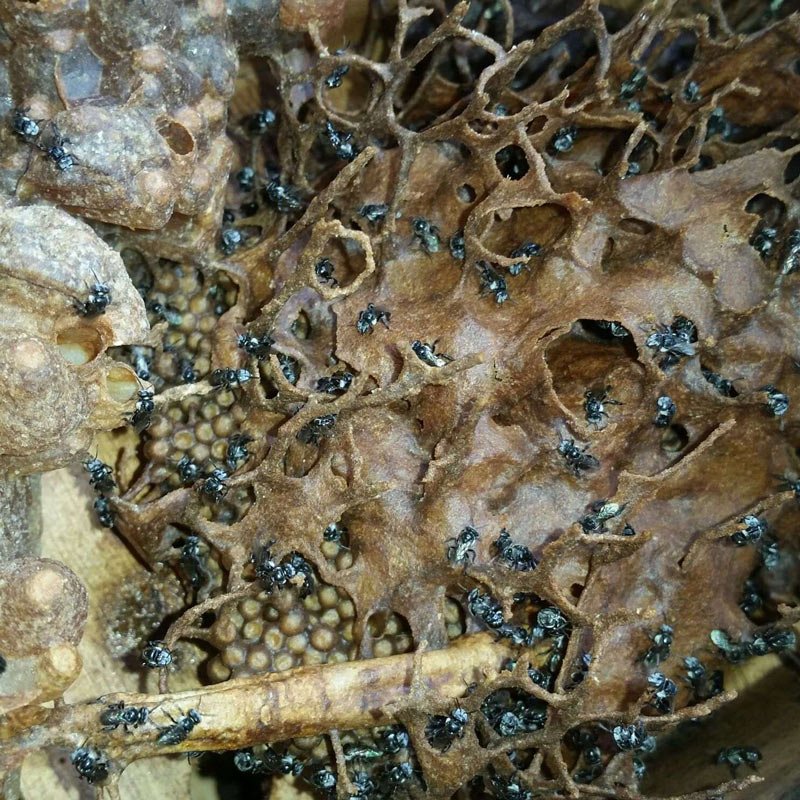 Tetragonula Hockingsi is a tropical to sub tropical bee found in coastal areas of Queensland and also the Nothern Territory. They have a population 20 to 50% larger than typical Tetragonula carbonaria. They are living large in sunny QLD.

The major characteristics of hockingsi are the ability to handle heat, and the ability to defend their nest. The brood structure, particularly in northern populations of this species is more porous, allowing air to flow through and cool it. In large cavities such as water meter boxes where they sometimes nest, hockingsi often have an empty area close to the brood which allows for more air flow when times are hot. Hockingsi also use less involucrum to surround the brood area. Much of the year the top of the brood has no involucrum covering at all. As well as aiding ventilation and heat management, this is a plus for hobby bee keepers as you can see the queen laying eggs and baby bees hatching.

I have seen the Hockingsi bees defending their nest with greater vigor than Carbonaria. Pests are harried and chased off. The down side to this is when you open the hive to perform a split or extract honey, as the bees of this species nip people more than their Carbonaria cousins. I have found that a cheap mosquito net that goes over my hat fixes this problem.

Genetic studies have identified two populations within this one species. Mackay is a hybrid zone, with a northern type above and a southern type below Mackay. Hockingsi is also a cousin to T.Carbonaria and T.Davenporti even forming occasional hybrids with these species.

The bee was named after Harold Joseph Hockings who first wrote about this bee under its Aboriginal name of Karbi or Keelar in 1884. It is a vigorous Queensland bee with a bright future.