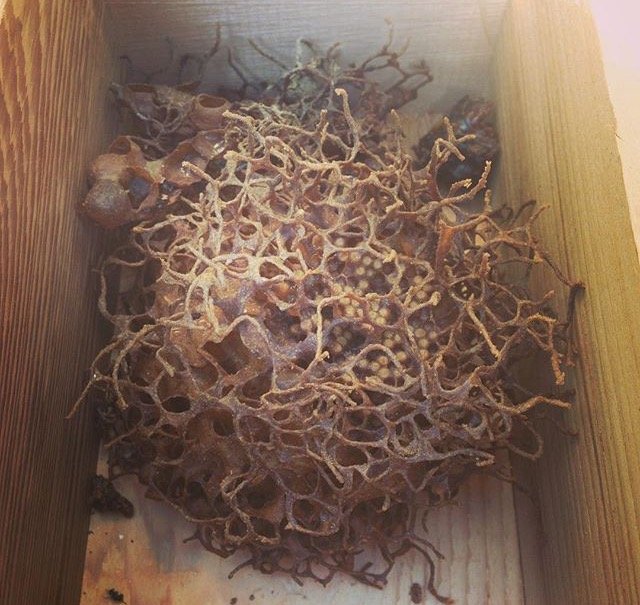 I’d like to share a range of strategies for growing weak colonies. Some of these I’ve copied from others and some I’ve tried by myself. None of this is rocket science and I think these are all methods tried by a lot of people over many years.

I rescued a colony from a fallen tree in July 2014. It was a massive colony and I tried to transfer too many stores. Small hive beetle attacked and I almost lost the colony. In October 2015 I had a look inside to find only half of one box being used. The colony was still tiny after all this time. I transferred a section of pollen pots the size of my fist from another colony to build them up. With this head start the bees were then able to fill two boxes and I divided the colony in January 2016. The lesson here is that it doesn’t take much help sometimes to change the strength of a colony.
If your bees are looking slow and weak, They look like they don’t have much energy… This is probably the actual situation. Feed them energy as honey pots or an internal sugar feeder.
If your weak colony has some really tiny bees.. this is protein deficiency. Pollen has protein for growing young bees. Add some pollen pots.
There are very few bees… This is a particularly bad situation as there seems to be a minimum number of bees that a colony needs to survive. Most of these bees for most of their lives have house duties and it’s only at the end of a bees life they go out to collect food. I sometimes see very small colonies that behave frantically. They promote young bees to field duties in a desperate attempt to bring in resources and for whatever reason these young bees are not suited to field life. Bee numbers quickly crash even further and the colony may die. With a colony like this you can add pollen and a sugar feeder. You can also add brood and even adult bees (see below).
Boosting a weak hive with adult bees…

Lots of people do this and it works a treat, but it’s also kind of risky because it might cause a fighting swarm. You have to be brave to try this method and accept the consequences if it goes bad. It’s very simple just swap the positions of a weak hive and a strong hive. The returning workers from the strong hive now enter the weak hive and boost the workforce.