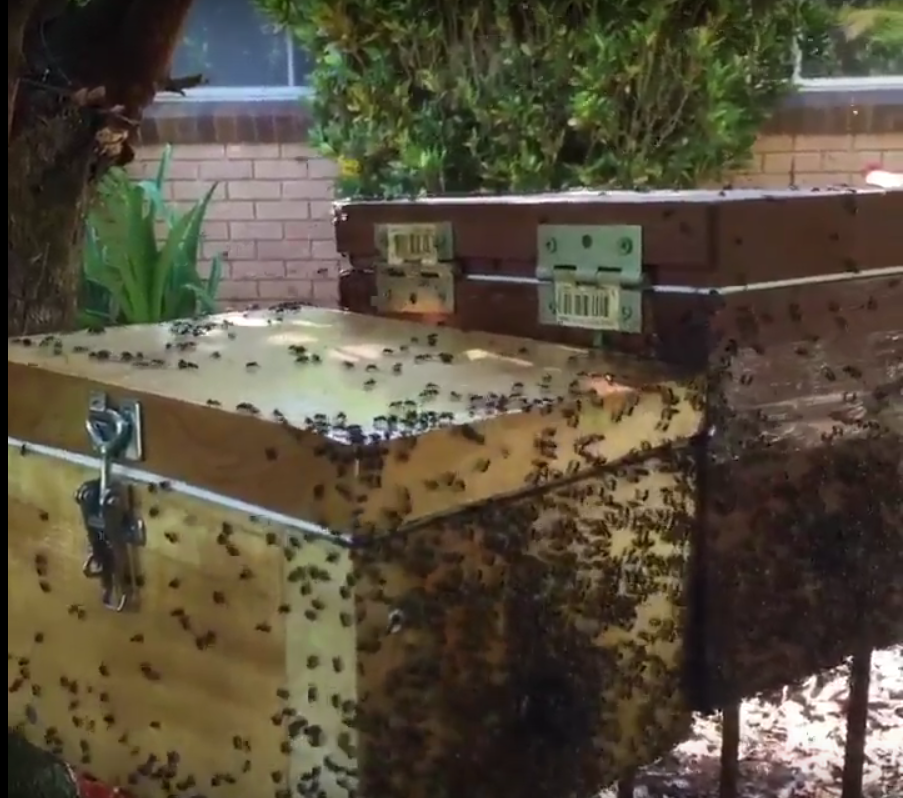 Mark is a Friend of mine who asked about capturing a swarm of native bees. I talked him through Dean Haleys method of capturing a swarm. Since then Mark has caught a few swarms and keeps me updated on his progress. I asked Mark if he would write a short article on his work and anything he has learned along the way to show and help others. Here it is.

Capturing a swarm is all about being prepared.

Firstly, having spare empty hives is imperative. If you have some spare propolis and wax. Very important.

Catching the early signs of a potential attack is the key, acting quickly by placing an empty hive next to the hive under attack.

Screening off and saving as many bees from the main hive as possible. And tricking the swarm by adding brood, propolis and defense material to the empty hive.

An attacking swarm will begin by crawling around the rear and sides of your bee hive. Small numbers will remain in the air and hovering around the entrance of your hive.

It won’t take long before this builds into a full on attack. Screen off the front of the main hive entrance. Stopping the swarm from entering.

I put a empty hive next to the main hive. Take some brood from a hive and place it in the empty hive. Off the floor.

Also pinch some propolis, resin and place it at the entrance of the empty hive.

There will be casualties. This procedure helps reduces losses. As the day progresses the swarm builds in the air and covers much of both hives. They will start entering the empty hive.

After day one. Day two the swarm bees return a few again crawling around the hives. Followed by greater numbers swarming around the area of the two hives. Increasing as the day progresses.

Pretty soon the main hive bees have blocked the front entrance or back vent hole with a defense material.  This material is most helpful if you take it and place it at the empty hive entrance. This will continue to trick the swarm into the empty hive.

By day four and five the bee’s attention to the main hive should decrease as their focus is primarily on the brood in the empty hive.

By day five or six I move my attacked hive to a new safe home.

You should see swarm bees coming into the empty hive with orange wax. A good sign.

And you should be able to see if the bees have started covering up the brood. And building structure.

This whole process continues daily.  The swarm bees work fast in the hive. The swarming outside stays around for anything up to 2-3 months.

Right now I am five days into my second attempt at capturing a swarm. Following the same procedure as before.

Remember to keep the new hive at its original aspect and height. Good luck.

My Name is Nick and I love making things!! Learning about everything is something I like to do. I have been a carpenter here in Australia for about 10 years but recently have quit my job to do something I love, make stuff. You can view some of the things I have made here - http://www.instructables.com/member/PowellMade/ I also have a passion for bees.