Bees in the cold- Part2 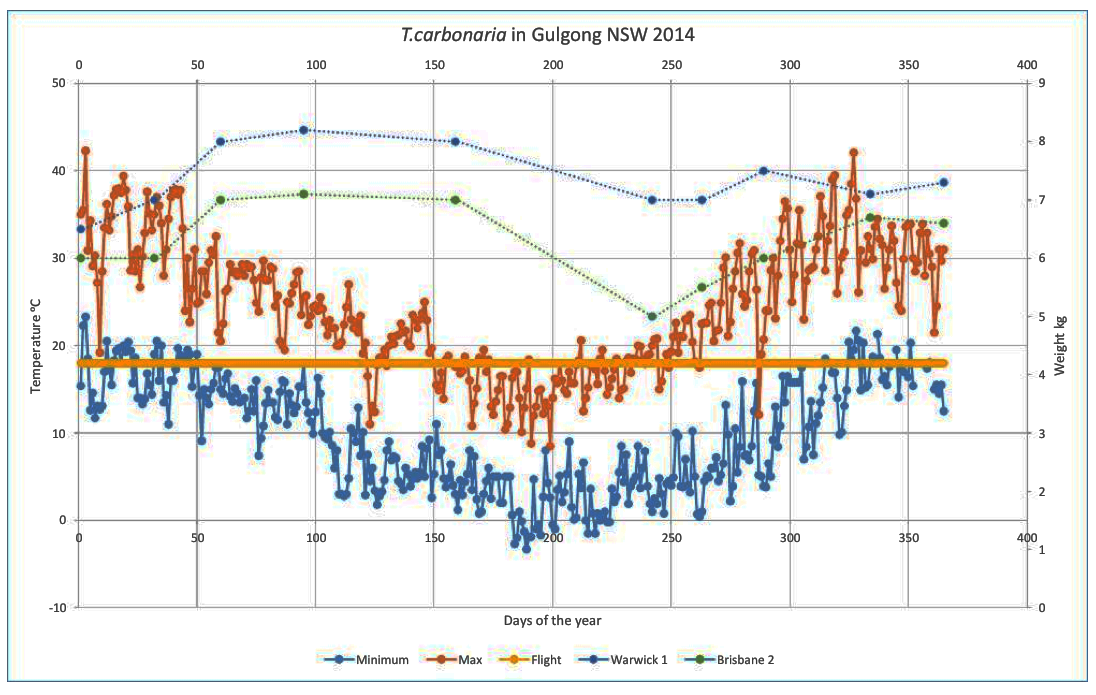 Bees in the cold- Part 2

A comparison of two T.carbonaria colonies in a temperate climate.

Two colonies of T.carbonaria were taken to Gulgong, a town located in the central tablelands of NSW at Christmas time 2013. This area is characterised by hot summer temperatures sometimes exceeding 40ᵒC, and cold winter temperatures often falling below 0ᵒC. Rainfall occurs fairly evenly between winter and summer, but summer rainfall events are generally related to storms while winter rainfall is more widespread and prolonged. Droughts are frequent and can last for years.
There are no records of stingless bees from the location of this town, though they are known from locations within 100km of there. In these locations they are now locally extinct or extremely rare.
The colonies were housed in standard OATH type boxes. One was from a colony rescued from a fallen tree in Brisbane. The second colony was purchased from Mark Grosskopf, near Warwick QLD. He said it represented the local genetics.
The colonies were installed on a stand that provided them with 100% shade in summer, and a few hours of full sun in winter. The width of the roof eave was designed following Australian building principles for passive winter heating of houses. A blanket was thrown over the entire stand at night during the coldest winter nights. No feeding or artificial heating was used.

The gross weights for the two colonies in kg is presented above (This is the scale on the right axes of the graph).  I have also plotted the minimum and maximum temperatures for 2014 based on Bureau of Meteorology data. Also, there is a line at 18ᵒC (flight temperature)
As the graph above shows, the temperature fell below the critical 18ᵒC required for foraging for approximately 100 days. At the same time, the night time temperature fell below 8ᵒC.
The response in mass of the two hives was most marked in the Brisbane derived bees. The minimum recorded mass of 5kg is very significant when the empty box weight is considered, at approximately 4 to 4.5kg. The bees from Warwick come from a climate that is more similar to Gulgong in maximum and minimum temperatures, though the winter is Warwick is not as prolonged. This hive seemed to handle the temperature conditions relatively well.
At the conclusion of 1 years monitoring, both hives were heavier than they were in the beginning of 2014. They were expected to survive subsequent winters but died due to period of prolonged cold in winter 2015.  This was a ‘Çold Snap’ with much colder temperatures than the 2014 graph above, with snowfalls in southern table-lands areas of NSW.
Other observations noted by my Nephew in Gulgong, were dead bees found outside the hives at the beginning of spring, and raiding of hives by honey bees at the beginning of spring. The raiding was stopped by placing grills over the entrance of each hive to exclude the honey bees.

Conclusions:
When this report was first written in January 2015 my conclusion was that our stingless bees could survive in quite harsh conditions. The hives dying a few months down the track made this conclusion questionable and has prompted me to do further studies on carbonarias ability to handle the cold. In retrospect, closing the hives and moving them inside during the 2015 cold snap may have saved these bees.

When you buy a beehive you should ask what its empty weight is. The boxes in the Gulgong study weighed about 4.5kg empty. If you weigh your bees about once a month it gives you a good idea what is going on inside and how well they are doing and if you should feed them. I have some fish scales that are pretty accurate but require a harness to use. That’s a bit fiddly so you can use bathroom scales instead. As bathroom scales are designed to weigh big critters like us they may not be accurate at the small weights. You can check this easy enough by putting some small objects of known weight on your scales, e.g margarine containers.
FEEDING YOUR BEES
There are a few options here. If you have a top opening hive and there is a convenient empty space you can put a float feeder inside the hive. Being inside the hive means it’s immediately available to your bees, and it won’t attract pests like ants which it might do if outside your hive.
I use a little plastic container like a film canister with straight sides (not tapering). I have a styrofoam float made from a coffee cup and poke tiny holes in this with a toothpick.
I use a 2 part sugar,  1 part water mix. I heat it gently on the stove while stirring to dissolve it. When cool I add a few drops of rose water for an enticing smell.
You can also put feeders outside your hive. Some people will attach them to the front entrance with tubing while others prefer to attach to the rear ventilation hole with tubing. See what suits you best. In this photo I am experimenting with a small hive I have brought inside. There is a float feeder in the small box attached to the front entrance.