Bees in the cold 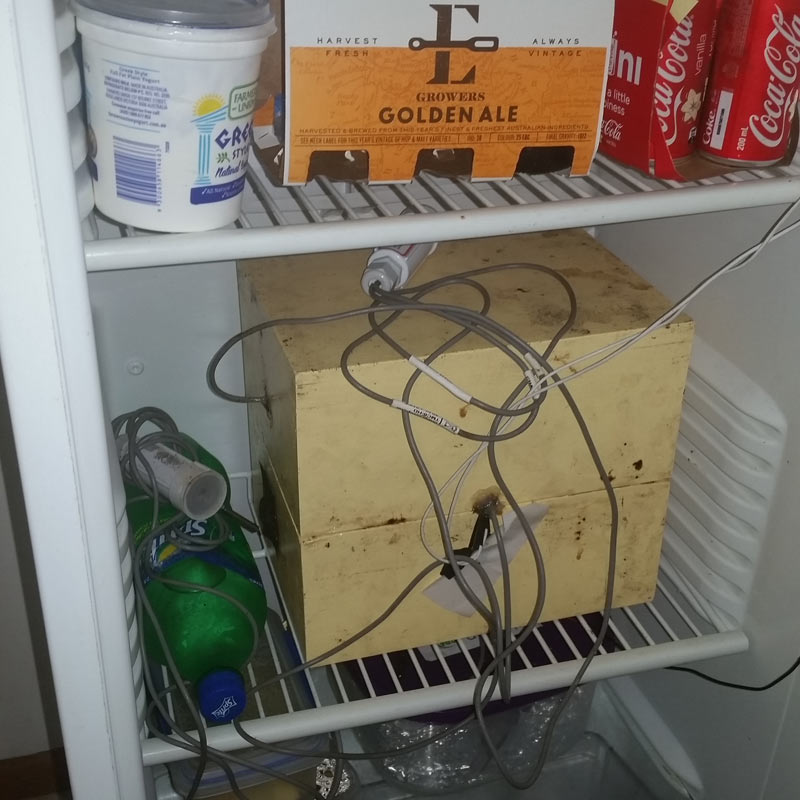 Bees in the cold

Stingless bees are widely regarded as being unable to control nest temperature like honey bees do. For the vast majority of stingless bees this is very true. Some species however, such as our T.carbonaria and A.australis extend into temperate areas with colder Winters and frosts.

I decided to study the effect of cold on some bees. I put australis, carbonaria and hockingsi in the dairy section of my fridge. I have a digital thermometer that can give me max and min temps since last reset.

BEES IN THE FRIDGE

My fridge ran at 4.1 to 14.8 degrees. Often when I observed the bees the temp was about 7.
Hockingsi fell over straight away and curled up on the floor. At day three I warmed them up and one third revived. By day 5 they were all dead.
Carbonaria were better than hockingsi. They did not fall over and could walk above 12 degrees. All were still alive on day 2 but by day three, 46% had died. There was one left alive on day 5.
Australis were better. At these temperatures they did not fall over at all. They could walk above 12 degrees. 80% were still alive on day 3, 50% alive on day 9 and the last one died day 14.
I also looked at carbonaria brood. 1 day in the fridge did not hurt it. Brood kept in the fridge for either 3 or 6 days was similar in that about 30% of the brood died, usually as a group along one edge.
By the way, carbonaria brood kept at room temperature (range 24 to 29.6 degrees) for 1, 3 or 6 days was unaffected by being out of the colony. All this brood hatched.
I am as you know interested in stingless bees ability to survive in colder parts of Australia. Explorer journals show that stingless bees were once distributed further south than they are today.

BEEHIVE IN THE FRIDGE

Armed with the above data I got really excited. What would happen if I put an entire carbonaria bee colony in the fridge? As long as I took it out before 3 days I shouldn’t kill bees, right?
I talked to my bee buddy, Bob Luttrell to see if there was any data out there. Not too much he said, and he loaned me some Hoboware temperature data loggers (www.onsetcomp.com) and wished me good luck.  Thanks Bob, very much appreciated.

I started with a well established T.carbonaria hive in a OATH box. The colony weight was 7kg (bathroom scales) and brood, internal structures and honey pots very well developed. I drilled a hole in the side of the box close to the mid line for my wires. I placed the brood probe between two layers of relatively young brood. The honeypot probe was at the same level in the box, about 2.5 cm from the front of the box.

Have a look at the hoboware graph recording 12 days of temperature data. Red line is brood, blue line honey pots and the black line is ambient temperature. There are three sessions where I put the box in the fridge.
The first session is an uninsulated box for 17 hours and watch that blue honey pot temperature crash to 12 degrees. What worries me about this, is that the brood temperature is ok but the honey pots are cold. If bees leave the warmth of the brood area to eat some honey they might get cold an unable to return to the brood area.

The second session in the fridge lasted for 24 hours. The average temperature was about 6 degrees with the odd cold spot as low as negative 3 degrees. My lettuce froze..
I let the box get a bit cold by keeping it without insulation for 5.5 hours and then I enclosed it in foam insulation. This is pretty good insulation covering every surface of the box and without a significant air gap. There were double thicknesses of 25mm insulation at the base and the roof of the box. For me this was a really interesting session because the brood started warming up hours before I took the box out of the fridge. The bees have control of that brood temperature! It is ranging 27 to 30 degrees. It is Superb.

I went for one last session in the fridge. I fully insulated the box in my super foam cover and placed in the fridge for 12 hours. At six the next morning I had the box (fully insulated) outside to catch the morning sun and left the insulated box there for the next two days. I love how the insulation has smoothed out the peaks and troughs of the ambient temperature. I just love it.

I showed a few friends pictures of my beehive in the fridge and they all asked how is this possible, why don’t they die? The reality is that I had the fridge thermostat set on mild and freezing night temperatures can be common in carbonaria country with day time maximums sometimes less than 10 degrees, so I see the refrigerator experiment as completely relevant. This article really is aimed at country that is generally considered too cold, or marginal for the survival of carbonaria. Now this means cold Winters only, not cold all year around, sorry Melbourne and Canberra!
In southern areas with cold Winters you want some serious insulation on your box. Standard boxes are ok for sunny QLD but not so for the temperate south where a cold snap of 3 or 4 days might kill your bees. That being said there are arguments for thicker walled boxes rather than foam insulated boxes. They look better, last longer and are not prone to get water, pests, ants etc caught between the foam and the inner box.
Feed your bees, please! Looking at these brood temperatures convinces me that they are burning lots of energy (honey) to maintain things. Don’t let them run out of food.
Put them in the sun. Winter sun in southern regions.
When you get those southern cold snaps, when it’s snowing on the tablelands and the pipes in your house are freezing each morning… bring your bees inside for a week. Cover the entrance with flyscreen or whatever and bring them inside. Don’t spray them with the flyspray though.

AUSTRALIS HIVE IN THE FRIDGE

The thermal characteristics of A.australis have been studied by previous authors. Megan Halcroft monitored hive temperatures for 12 months and reported that australis had some ability to warm their brood area. This is especially so in Spring, but the temperature of the brood is not raised much in Autumn and Winter. Megans works is very well presented and set out. I fully encourage you to check out her studies here:

I put them in my fridge a total of three times in this 9 day study. The first time was with an uninsulated box and honeypot and brood temperature followed ambient. A brood temperature of 7 degrees was observed after just 9 hours in the fridge.
A Styrofoam box was used for extra insulation immediately before the second session in the fridge and the styrofoam was left on until the end of the study. The extra insulation has provided some slight advantages. Thermal lag  is increased and the minimum temperature experienced inside the nest has not fallen to ambient (refrigerator) temperature even after 12 hours.

My study does not show a great ability for australis to control nest temperature. On the other hand the individual australis bees were more tolerant of cold temperature than either carbonaria or hockingsi bees. Based on both bees and hive data, I’d start to worry about your australis hive after one week of extremely cold weather.
There is a real difference in the way that australis and carbonaria react to the cold, and what we can do to help them survive. In truly cold areas I would recommend insulation or thicker boxes for both types of bees. When you get really cold snaps that last for more than a week, consider bringing bees inside, both australis and carbonaria.

What about a beehive that sits inside your house  on your windowsill? They won’t get cold.

Here are some links to check out.